Organise Your Own Challenge! 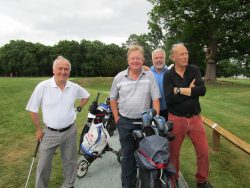 Again, we had a hugely successful Charity Golf Day at Burhill Golf Course at the end of May 2019 and we will be back at Burhill on 27th May 2021.

Time - Arrive for 11:00 to register and for coffee and bacon rolls

There are few golf clubs that can offer the choice of two outstanding 18-hole golf courses, let alone two that are so completely different. Designed by Willie Park, recognised by his peers as the first true genius of golf course architecture, the Old Course at Burhill was opened in 1907. At 6479 yards, this par 70 is not long, but is a great challenge; whatever your handicap and complete with a beautiful parkland course. A well thought out game is required to beat the course, particularly the par 4, 4th hole, where a poorly placed drive leaves no shot to the green, and the par 5, 14th, where accuracy from the tee is paramount. The Old Course has some of the trickiest greens in Surrey. With many hidden slopes and undulations, local knowledge is a definite advantage.
Mature tree lined fairways together with some typical Surrey heather, ensure a premium on accuracy from the tee. Between the 14th and 15th fairways lies ‘Dick Turpin’s Cottage’. This cottage was previously an alehouse, and some say it was used as a hideout by the legendary highwayman. The ‘Kings House’ sits to the right of the 10th hole. This building was presented to King George V in 1935 and was later occupied by Lord Trenchard. Burhill’s Old Course is listed in the Top 100 Golf Courses in England.
Built to the south of the clubhouse, the New Course occupies land that was originally home to Burhill’s South Course, which was given up for arable use during the Second World War. This remarkable championship course, host to the Europro Tour for the last 5 years measures some 6940 yards and has a par of 72. It is built in complete contrast to the Old Course and incorporates the River Mole and other dramatic water features. The New Course also has many well-positioned bunkers, creating a demanding test of golf. The course is fully irrigated, and has well-manicured fairways and exceptional greens built to USGA specification. Unusually, the 18th hole is a par 3. This spectacular signature hole requires a solid tee shot over the River Mole towards the Georgian Mansion Clubhouse, to a two-tier green where, with an audience of golfers.

We use cookies to ensure that we give you the best experience on our website. If you continue to use this site we will assume that you are happy with it.Ok